Living in a fairytale seems all right – at least for all those characters working toward their happy ending. Only it doesn’t stop there, and suddenly they’re forced to face reality… 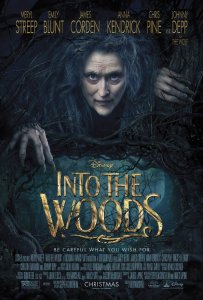 Originally a musical by Stephen Sondheim and James Lapine, Into the Woods debuted in 1986 and has now come to the cinemas as a dramatic musical fantasy film directed by Rob Marshall. Combining several well-known fairytales – Little Red Riding Hood (Lilla Crawford), Cinderella (Anna Kendrick), Jack (Daniel Huttlestone) and the Beanstalk – and general fairytale stock characters, it follows the efforts of a baker (James Corden) and his wife (Emily Blunt) to break a curse put on their family by the evil witch next door (Meryl Streep) – a curse that makes sure they remain childless.

Careful what you wish for

Admittedly, I have never seen or listened to the original musical, so I came to the movie completely unprepared – and while I am not sure what it was exactly that I expected from it, it wasn’t this. Yes, it took me quite a while to actually get into it, but once you put aside little things that might annoy you and stop taking it too seriously, you will likely start to see its merits – quite beautiful cinematography, for example. Essentially, the film is a parody and commentary on conventional fairytales and the stereotypical characters that inhabit them – and it questions quite brilliantly the ‘And they lived happily ever after’ issue. Because happy endings are not really what the film goes for. In that sense, it starts getting inherently better and gaining much more depth once the big ‘plot twist’ happens; all of the sudden and for what seems to be the first time, the characters are faced with the consequences of all their lovely wishes and the decisions they made along the way to get to their happy ending. The evil witch – by far the most complex and fascinating character throughout the whole movie anyway – points out their shortcomings and their reliance on ‘fairytale qualities’ brilliantly in the song The Last Midnight, putting into perspective not only the other characters, but also herself as a villain, and by extension reflecting upon the role of witches in fairytales in general:

And all the singing…

Alright, I know that this is a musical film, and there is supposed to be a lot of singing in there. And that’s perfectly fine, I love musicals. Yet this one started to feel like ‘too much’ way too soon, which had quite an impact about how I felt about the film at the time. So if you’re not into musicals, you probably shouldn’t really watch this one. However, there were a few good songs: Agony for example was absolutely hysterical, both because of the singing and the princes’ (Chris Pine and Billy Magnussen) hilarious acting, and stuck around in my head amusing me for hours after. And, of course, The Last Midnight, which Meryl Streep totally rocked; it still gives me the chills now.

So should you watch it?

With this movie, much more so than with others, I would say it really depends on your preferences and tolerance for a lot of singing. In general, I thought it was a really strange but, after all, enjoyable experience – and a plus for me, of course, was Johnny Depp as the Big Bad Wolf. You can say a lot about his career, but I still very much enjoy his screen presence, even though it seems a bit ‘weird just like last time’. So if you’re interested in being presented with a different perspective on fairytales and the like, then yes, go see it. For me as a villain expert, though, it was especially fruitful…