A washed-up actor is struggling with his life and sanity, trying to find new meaning in his identity. But no matter what he does, he cannot seem to shake off the iconic superhero that he used to be. 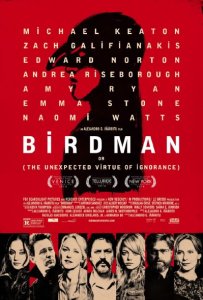 Riggan Thomson (Michael Keaton) does not have an easy life, or so he thinks; in the days leading up to the Broadway opening of his theatre play, everything seems to go wrong, and he ends up doubting himself and everyone else more than he ever has. What if he had stayed in the film business playing the superhero Birdman all those years ago? And what if he had one more chance to be Birdman again…?

I find it is always difficult to have increasingly subjective movies without making them too disturbing or too weird, keeping everyone intrigued to watch. This film excels at it. Riggan has a problem that most people face (hopefully in milder variants though) – he doesn’t know how to build up his self-esteem and self-respect on his own, and since his self-worth is based on his acting career and the way that other people see him, he is desperate. This depressing play he’s putting on is the one chance that he sees to reaffirm himself in the business. But what is the ‘business’? Because really, it does not appear that Riggan cares too much about theatre – rather, he appears to look down on it; he’s been in film, he’s been a Hollywood star, and he let that get away. Slowly, the lines between him and Birdman blur. And in the end, you’re not even sure what to make of all this – and how to judge it, if at all.

A critique on the entertainment industry

The film doesn’t just show how Riggan tries and fails to cope with his life; it also explores parts of an entertainment industry that, to outsiders, always looks very ‘glamorous’ and ‘cool’ and ‘unreal’. The actors are clearly struggling with similar self-esteem issues; Riggan’s manager, lawyer, and friend Jake (Zach Galifianakis) constantly tries to solve legal issues and get the goddamn money for this show; and even their acclaimed actor Mike (Edward Norton) cannot go a day without aggravating people and making them want to punch him. The screwed-up gang is complete with Emma Stone’s fabulous portrayal of Riggan’s daughter Sam, a young woman struggling with drug abuse and, well, life. But they’re doing ‘art,’ right? It doesn’t matter. The only thing that really matters – that is going to determine whether the play lives or dies – is the critics..

The Unexpected Virtue of Ignorance

The more the film progresses, the more we can probably see that the less we know, the better we’re off – that we are bound to stick to our illusions and dreams because they’re the fuel that propels us forward. But Riggan also shows what happens if that fuel runs bad – and when delusions and reality start to really mix, you cannot distinguish what’s going on anymore. We, the spectators, certainly can’t at times. Birdman is an excellent dark comedy and I can highly recommend it – it’s ugly, it’s funny, and it’s basically really weird. And in the end, the film also criticises us, the audience, along with everything – it alienates us, forcing us to think about what we do when we compartmentalise actors, won’t let go of seeing them as that one character. An intriguing, fun and deep experience indeed.