I’m still alive! The reason for this bit of radio silence was that apart from (and during – no rest for the wicked) an amazing vacation in Italy, I’ve been swamped with various projects for university. Spoilers: it’s about villains. Surprise!

Most people should have realised by now that I am really, really excited about villains – everywhere. And because I just love anything narrative, I have always had a hard time restricting myself to only one medium – literature, or film, or video games? My current obsession (and I predict a long-term relationship here) is therefore transmedia storytelling – the beauty of transmedia storytelling is that anything goes. Well, not anything, but a lot. Essentially, transmedia storytelling is a process during which a story is told across several different media – of course it’s also much more, and I’ve written a bit about it before. It’s a fascinating phenomenon and the more I read about and experience it, the more intrigued I am. Needless to say, both of the projects I’m working on are about both villains and transmedia storytelling. So what are they?

I am a very tidy person, and yet this is my view these days. I really need to make space on the bookshelf… 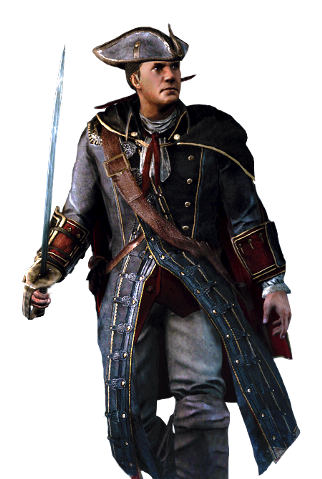 That is not actually the title, but it is somewhat appropriate. My Master’s thesis, which I will properly start working on in February, deals with the Assassin’s Creed franchise – the prime example of transmedia storytelling that my professor had been talking about in class, and of course my favourite video game series. (Well. If you ignore the fact that AC3 ever happened.) We had been going back and forth on my thesis topics because there are just so many interesting things out there, until we finally realised that my ideal topic had been right under our noses the whole time: how about looking at how a villain can be presented and changed in a transmedia context? And rather than looking at the ‘overarching villain’ of the whole series (the Templars in general, and even that is questionable with Assassin’s Creed: Rogue), it would be much more interesting to look at one character specifically. Ubisoft seems to have taken to Haytham Kenway, and so have I by now. In-game, Haytham was first introduced as the villain in Assassin’s Creed 3; in Assassin’s Creed VI: Black Flag, we play his father Edward; and finally, he re-appears in Assassin’s Creed: Rogue.

Chronologically, that is all quite screwed up, and I’m interested in looking at what that means for the character. But furthermore, looking at the transmedia context, the novel for Assassin’s Creed 3 (called Forsaken) actually consisted of parts of Haytham’s diary, and he plays some kind of role, though not personally, in the novel for Assassin’s Creed: Unity. No spoilers for now, but let me say that he tends to become a lot more complex if you look at all those different media – and the fact that in Assassin’s Creed: Rogue, you actually play a Templar and work alongside Haytham changes your perspective a little more. So this is part of what I will be looking at for my Master’s thesis – I am very excited for the opportunity to investigate my favourite franchise in-depth.

‘Wanna know how I got these scars?’

The second major project is a little harder to get my head around, and it should be because it’s a proposal for a four-year PhD position. (Fingers crossed someone will take me.) One day – I believe shortly after I watched Thor: The Dark World and was quite fascinated with Loki, I was wondering what the deal was with supervillains. I already know that villains are very interesting and that I’ll still do tons of research on them, if they’ll let me, but what is the deal specifically with supervillains? And also, why is such a niche genre suddenly so popular and mainstream? Now, all kinds of media are in some way a reflection of our time and of the society that creates them. And especially in the case of superhero stories, I think they really bloom in times of crisis. (Superman was invented in 1933, first appeared in comic books in 1938, and Captain America followed suit in 1941 – very literally ‘born out of war’ to reaffirm the binary of good and evil in the eyes of the public.) The post-9/11 bloom of blockbuster superhero movies sort of speaks for itself then – but that is an interesting thing to look at. So if I end up receiving a grant for this, I’ll look at various incarnations of supervillains across time – I’ll look at some of the comic books, some of the animated TV series, some of the films and some of the video games, in order to determine how their portrayal changes (if at all) in different media, the reasons for that, how they are portrayed transmedially, what it all means. I’m curious about the result, and I do hope I’ll get the opportunity to pursue this.

But while I’m a busy bee, I’ll still try to keep you up to date with interesting things in the games and movie world anyway – two very special things are planned for later this year, but that’ll be a surprise. Live long and prosper!