I know I promised this a week ago already, but times are very busy, so I am only going to drop a few lines about another villain now – the last in the Imperial March series (well, rather post-Imperial March), but I am enjoying these posts so much that I might just do it a monthly thing – one villain post a month, maybe. There are so many good ones out there, after all! Keep your suggestions coming, I’m grateful for your input. For now, let me draw your attention for a few moments to a rather unusual villain who is actually a superhero: Captain Hammer from Dr. Horrible’s Sing-Along Blog! If you’ve never heard about it (and shame on you), this is a short tragicomedy-musical  by legendary Joss Whedon, starring Neil Patrick Harris as Dr. Horrible, Felicia Day as Penny – and Nathan Fillion as Captain Hammer. If not all of these names make you sit up straighter in your chair, I think you need to get less of a life and spend more time on the internet.

So, Dr. Horrible’s Sing-Along Blog is, as you could have guessed, all about Dr. Horrible, an aspiring supervillain who is trying to join the ‘Evil League of Evil’ – but for his admission into the League, he needs to do ‘some heinous crime’ to show he’s serious and capable. At the same time, though, he tries to approach a girl that he has a crush on, and his plans are constantly foiled by his nemesis Captain Hammer. 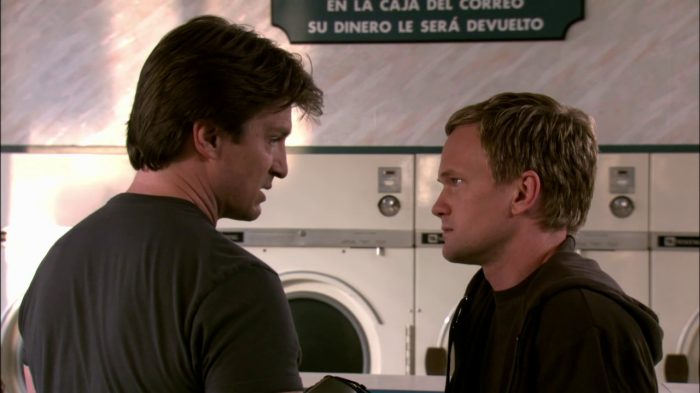 “This is not the hammer. … The hammer is my penis.”

Now, Captain Hammer is a superhero, and he does his superhero deeds, but two things make him the real villain in this work: first, the fact that he is the (obnoxious) protagonist to our villainous but rather sweet-hearted personality, and second – gotta be honest here – his personality. He is arrogant, a narcissist, glorifies himself, does not really care much about others, he’s not exactly the brightest, and his ego is the real reason he’s doing all these good deeds. Yes, maybe there might be some good motives hidden somewhere deep in there, but clearly that’s not the way the character is supposed to be seen – especially when compared to the rather complex Dr. Horrible, who turns out to be a truly tragic character.

So Captain Hammer is not really the kind of character you get used to; the director took good care not to give him any redeeming qualities, really. Even when there might be a point where he could possibly be more truthful and more honest, there is still a lot of self-glorification to be done here.

Everyone’s a hero in their own way – you and you and mostly me, and you.

So there are a lot of issues here, of course – but the whole dynamics is what still makes him interesting. It’s more what he means on a meta level, or what all of this means on a meta level, ridiculing the typical superhero-villain dynamics that you might normally have – or not necessarily ridiculing them, but showing them from a completely different perspective; from the villain’s. Because, really, how many times do the superheroes in those comics and films just walk around bashing the villains’ heads in? Maybe they were just heading out for lunch. (Yes, I know they weren’t.) And Nathan Fillion is a god when it comes to portraying arrogant, not-so-nice characters, really. I mean, Firefly? Yeah. Castle? Still works well in that area, too, although he’s much nicer here.

So what I’m really trying to say here is – if you haven’t, go watch this. If you have, go watch it again. I have fond memories of re-watching this, and there are some songs – like Brand New Day –  that tend to get stuck in my head for days at a time. If you know anything about superheroes, you’ll enjoy this – a lot.