The time of waiting has finally come to an end – and is only just beginning: today the first episode of Telltale’s The Walking Dead, Season 2 was released: Episode 1: All That Remains. So tonight, I sat down with a friend in front of my Xbox 360 to enjoy the powerful storytelling experience that was sure to come. 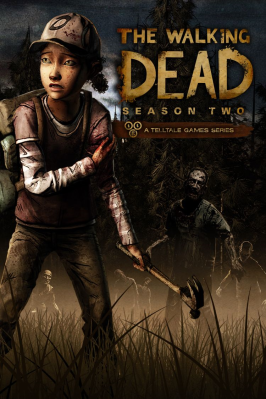 The first season ended with quite a bang (very literally so in my and many others’ cases, too) and had left me in tears and despair, again quite literally. And immediately, all kinds of rumours and speculations started: which characters might have survived? Where did Clementine go after her final encounter with Lee? Did she survive? Who would be the new protagonist? What kind of storyline would they whip out now and would it meet its expectations after its heartbreaking first season?

When Telltale first announced that the new season would feature little Clementine as the protagonist, I was admittedly skeptical: so much could go wrong here, and playing such a young, relatively helpless girl did not seem to add up for me. Taking care of her? Of course, but then it’d be Season One all over again, wouldn’t it? So what would be the catch here?

To my surprise, it worked quite well; seeing Clementine’s development in a summary at the beginning put me in just the right mindset again to face what was coming. The episode starts not too long after the events in Savannah, bringing back and taking characters we already know. Although their decisions might have been a bit off, it did make for a good start – and moved quickly from there to jump a time gap of almost two years. Once again, the sudden change in Clementine is astonishing and sad, too, especially compared to the sweet little girl that we met one season ago. You see her numbed to the world, but she’s still trying to maintain her typical warmth. Not much is said about what happened in between, and an unfortunate series of events leads her to people who, just like anyone in a zombie apocalypse, are wary of strangers like her…

The new season once again excels at portraying not only the obvious problems in such a world (zombies, d’uh), but also the possibly more pressing interpersonal problems that such a collective trauma brings with it. Then again, it’s not like things were perfect before; the zombie apocalypse, however, amplifies the differences and puts everyone quite on edge – and it’s a sharp one, too. Heated arguments and secrets are a regularity, but this time, we can only view it from an outsider’s perspective. It’s a refreshing departure from the first season: Lee, after all, was the main go-to guy even if most of the people did not like it. This time, other people make decisions, and you can only hope you are convincing (and cute) enough to make a difference, to influence the grown-ups. It can be frustrating to see, but of course that’s the point. At any rate, this episode already continued to bring new, interesting and (potentially) deep characters to the table, and I am already curious to explore everyone’s backstory – but of course, all in its own time… 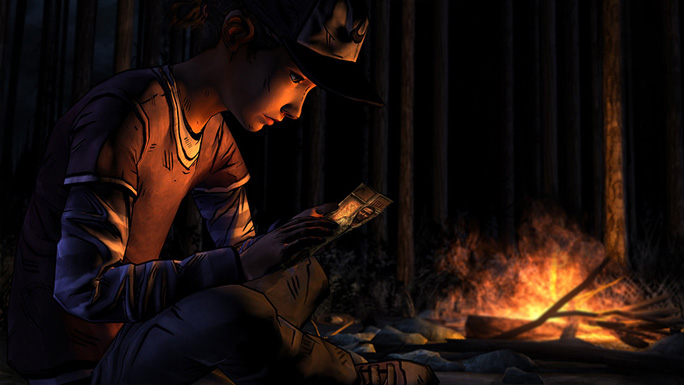 Clementine trying to make sense of past and present…
From http://www.telltalegames.com

Naturally, not everything was good about the episode and nobody can be perfect. A positive point to note, though, are the gameplay changes. Adhering to its predecessor, the game consists mainly of quicktime events and relies heavily on the atmosphere it creates instead of action; which I absolutely love. There should be more games like this. Improvements are the way the quicktime events are realised and more diverse: using the stick from time to time to evade certain things brings a bit more flow into the game and is also much more intuitive, although, of course, the normal use of quicktime events still plays a big role as well. Like in The Wolf Among Us, the game can be sped up a little by walking slightly faster without actually disturbing the tense, disquieting atmosphere.

However, in some places the game felt too guided, too straightforward, too one-way. In certain moments, it would have been nice to have more of a choice instead of being forced to do something that does not quite add up. Then again, maybe that is just a typical start problem of how to get the story going, and hopefully it’ll be more diverse in the next episodes. Then another issue bugged me, and that was – bugs. Maybe I’m just unlucky because games like to malfunction around me and, of course, they could have been much worse; it seems that other gamers have had worse experiences, too. In two instances, though, people were there that weren’t supposed to be actually there, and seeing Clementine walk through them threw me off a little. Those were the only two technical problems that I had though, and I suppose that’ll be fixed soon, too.

Naturally, one episode, especially one this short (even with numerous interruptions and taking a ton of time to explore things, I don’t think it amounted to two hours – maybe one and a half) cannot compare to a whole season. In the first season, I did not actually start crying until the third episode, so of course the emotional impact of this one episode was not that enormous yet because, well, the new storyline and the new characters have to be developed properly first so we can get attached to them. However, it did have its moments still: the dinner conversation in particular got my eyes a little wet, and the beginning, too, brought quite the shock as well and brings you a short, but effective high-and-low of emotions: of amusement to sadness. The grim comic-style graphics do their best to contribute to that atmosphere as well and reflect Clementine’s state of mind.

I’m relieved that the choice of protagonist turned out well against all odds. Then again, it does make sense, doesn’t it? The player’s attachment to Clementine is what fuelled the first game, what drove almost every decision, and you had an indirect influence on the kind of person Clementine could become. Now Telltale has taken it a step further: you have a much more direct influence on the person Clementine will be because you are Clementine. And like with Lee, you can choose to be the good, well-behaved girl despite the terrors you’ve seen, or… not. I’m looking forward to seeing her grow up further at my hands.

So even though the ending was a little abrupt and slightly predictable, I am dying for the second episode to come out. Already, Clementine has tough decisions to make, decisions that she won’t be happy with either way, and that’s, after all, what it’s all about, too: that no matter what you do, you cannot be the knight in shining armour. You’re just human. My friend’s words probably sum it up best indeed: Short but full of feels.

A Season Pass is available for purchase online or through the game, which gives you access to the new episodes as soon as they are released.

3 thoughts on “The Walking Dead, Season 2: All That Remains”