…or: reindeers are better than people!

Last night was cinema night again! And after not writing a 5th Estate review when I saw it last week, I figured this would be a good opportunity to share some more magic with you. The magic in particular is the new Disney film which was released a few weeks ago in some places, but only reached the Netherlands on December 11 – so we were right on time.

Young Princess Elsa is struggling with her snow/ice magic after an accident involves her little sister Anna. Out of fear and trying to gain control over it, the royal family shuts itself off from the world – and each  other. Anna spends years in solitude pining for her sister’s love and attention while Elsa avoids her and locks herself up in her room for years. Fast-forward ten years – the parents are gone, Elsa is crowned Queen, and the turbulence of emotions makes magic go awry – very awry. And so it is up to Anna and her friends to save the country from being frozen forever…

Warm and fuzzy in the cold

Frozen was a box office success and according to Wikipedia, “several film critics [consider] it to be the best Disney animated musical since the studio’s renaissance era.” I would quite have to agree with that. Of course there have been some nice ones over the last few years – Tangled, for example – but I still found Frozen quite exceptional; hilarious, yet emotional without being soppy;  and the way they suddenly burst into (quite hilarious at times) songs just makes you want to jump up and sing along. In love with the characters and the visuals, just sit and enjoy, and be surprised still by even the smallest things. Its 3D nature once again works extremely well. Of course the subject matter helps; there are just so many beautiful things  that you can do with snow and ice, and they make full use of that.

The film had surprising depth on the character level, expressed in just a very little time span. Yes, even the reindeer has a great personality, a man’s best friend indeed: Kristoff and Sven are truly inseparable. The characters are lovable, but far from perfect and with believable motivations, too. Of course it’s also a film about love – but while true love gets featured quite prominently, the dominating one in this film is really the one between family and friends, and the film goes meta on several occasions, sometimes even critiquing the cliché fairytale dynamics that it departs from. And I must admit, even I did not see the true villain behind the whole thing coming – which is a little itch for me right now because I am normally too villain-savvy to be deceived so easily. Very refreshing indeed! 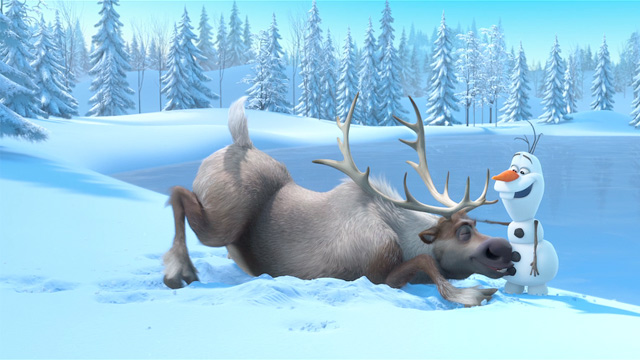 Sven and Olaf playing in the snow
(http://www.theguardian.com)

Something to cuddle up to

While it makes you think at times, the film also just makes you feel this fuzzy, happy Disney warmth inside of you that always seems to linger on for a while, and it is definitely not the last time I’ve seen it. It may have potential to move quickly up to the ranks of my Disney favourites; brilliant script, hilarious jokes, dorkily cute at times (I was definitely not the only one who was laughing and going “Aaawww!” quite frequently), and indeed quite a new, original and more down-to-earth take on The Snow Queen fairytale by Hans Christian Andersen which it is based on. Of course it also jokes around a lot with stereotypes, as these things do, but in my eyes, at least, not in an offending way at all. And last but certainly not least, it ends on a different twist on the whole “true love” angle, turning around and kicking the cliché right in the face.

Definitely worth seeing, and it does, indeed, get me into the whole Christmas/winter mood. It hasn’t snowed yet where I live, but after seeing the film, I kind of wish it would. Go and enjoy it, and let yourself go all fuzzy inside.